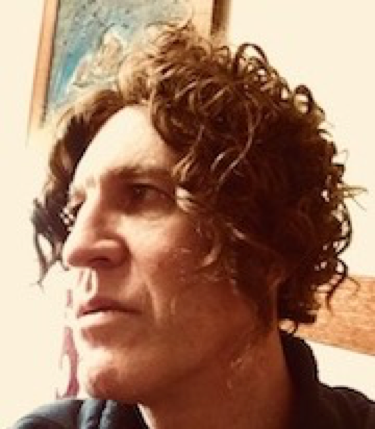 Today is Tuesday, but really it could be any day. I’ve lost track. I slept poorly again, but mercifully was spared the vivid nightmares (like the “Black Madonna” dream) that turn into waking panic attacks that have plagued me (pun intended) throughout this quarantine. I’m glad I’m writing, in fact more than I’ve ever written before; maybe it’s compensatory. I like the poem about the Black Madonna, even though the experience itself was unpleasant; as usual beginning in a dream I had about her that bled into a waking panic attack after I saw her black figure hovering at the foot of my bed, encased in a “black oval;” causing me to half-wake myself yelling “what?—what?—what?”—because I still saw her lips were moving, but I heard nothing. That’s how I feel most of the time now.

After the first month of news binging and heavy drinking, I knew I had to change. I made adjustments that are making this Quarantine begin to work in my favor; I still feel trapped, but my life doesn’t feel empty anymore. I’ve found ways to turn emptiness into solitude and work this quarantine to my advantage.

Writing again regularly is a game changer. It’s been three years since I last had any writing practice/process. And I’m beginning to realize that I’m writing a book now, not just poems; which seriously frightens me—yet I feel compelled to do so, in spite of my reluctance or maybe because of it. Poems are appearing, weird new subjects are emerging, determined to be written and thrown out into the world, if possible. Reckless poems. Incriminating poems. Poems I never wanted to write (actively tried not to write) are getting written every day, somehow triggered by a new kind of solitude. 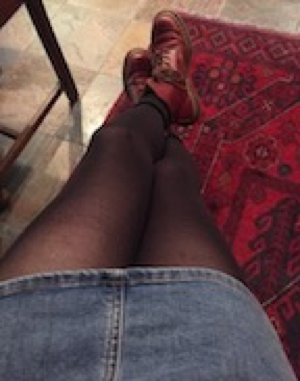 his quarantine is also affecting how I feel about my body and my gender dysphoria. Before quarantine, I described myself as non-binary or gender fluid, but that’s evolving. I’ve begun dressing as a woman all the time, carefully shaving my legs, and painting my nails, acquiring some casual everyday clothes, not just my Goth clubbing and party clothes—like a denim mini skirt or a flippy summer skirt. And the longer I do it, the less comfortable and attached I become to the male side of that non-binary equation.

Something is shifting inside me, that is freeing me from a captivity I didn’t realize I was already experiencing. I wrote: “I’m ripening my dysphoria like a rose in this hothouse, forcing a bud to bloom—“ I don’t even want to think about “passing” or hormones. I’m just not going there today. But I’m beginning to consider new ways to express and live out my true gender. It’s not simple, partly because of where I live. Last summer, I was assaulted downtown, in broad daylight, just for being there—I still replay it everyday. I still feel unsafe downtown. Let’s face it: I’m fucking scared to walk around this town dressed as a man with black fingernail polish. I’m getting bitchy, I’m going to take a break.

Death is political now as the pandemic grows into some kind of re-election strategy. Cases are surging in Bellingham: BLM and Gay Pride protesters march in masks. Proud Boy, white supremacists armed AR-15’s with their huge jacked up black pickup trucks, gigantic tailpipes and “Trump/Pence,” bumper stickers are mask-less as they, prowl the downtown. They try to intimidate the owner of a local ice cream parlor. Who are these cowardly white men? Who are their armed conservatives allies? Well, they’re my neighbors. Last night, just across the street from me, my neighbor threw a party on his deck, his male friends doling out the usual dog whistles: “it’s just hoax,” “there’s no risk in going out,” “fucking snowflakes.” Each trying to out outrage the others. Baiting.  I’m not a dog. I don’t give a fuck about whistles.

I’m realizing now much useless toxic masculinity is here: bullying and selfish. My next door neighbor has decided quarantine is the perfect time to remodel his bathrooms and has spent the last two months, cutting tile on his driveway. Another neighbor, has pulled his table saw out onto his driveway and has been at for the last two days non-stop. Yet another man, up the street tried to mask shame me yesterday as I passed chuckling, “Is that you under that thing?” No comment.

I’m struggling to limit my exposure to the news cycle that was bookending my days. I’ve adopted a strategy of limitation that applies to both the virus and the news cycle: reduce the viral load. It works.

Today, I checked the local infection/death rate and then switched to social media (visual media for me), then artwork, virtual theater productions, fashion shows turned into art films. Everyday life is changing, to survive. The Internet is fused with everyday life, just as everyday life is imperiled by sameness and repetition. Social media feels like a dangerous imperative, a desperate survival strategy. 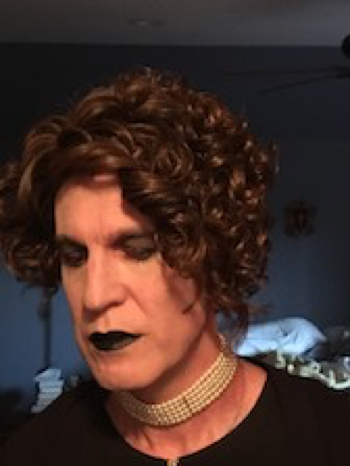 Before it closed for quarantine, the Club was the only place I felt totally safe to go out to as a woman. Is it ironic that it’s a BDSM club? Is it strange that I’m a total masochist? Or  that I highly eroticize/objectify my own body? My friends don’t get it. Certain kinds of pain release/erase me completely, like an orgasm, only better. The pain becomes unimaginable, then suddenly I just forget the pain—as my brain explodes. Endorphins and narcotics blow my mind—a derangement of the senses. I wrote the woman who last beat me “I feel pretty when you hurt me.” How can pleasure be wrong?

Now, the Club’s closed and gone forever. When I found out I was devastated, speechless. A whole community, basically all my non-binary and queer friends, who had already disappeared during quarantine were now not going to be gathering there in the future—I had been living on the slim hope it would reopen. Now, we’re all reduced posts on Instagram or Fetlife. We’re all in shock. Many, like me, have immune system problems, so we can’t take chances. There are no visitors. No one verbalizes my chosen name or pronouns. I wrote: “& I’m afraid that this/ is the afterlife, when life has taken & killed all that you loved.”

I miss human touch, I really, really miss it. I never realized how much my body was touched before lockdown. It’s gone now, but still—I won’t go there—I’m untouched. To me, touch means my animal, my body. Now, I only touch and am touched by Sadie cat, my surrogate animal. My body is untouchable, like a relic, by virtue of the pandemic’s demand for sequestration. I’m in my privileged safe house next to the woods; in a purple state, in a purple city, in a blood red county—untouchable and unseen—but alive, desirous.

For me, touch is a consequence of being seen and an intimacy that enacts acceptance. I enjoy a wide variety of touch: the light touch on my arm or shoulder, an embrace, and the painful touches that come with a cane or riding crop—bruising my body for weeks to come with an evolving color field of pain. I adore those bruises that mark/remind me of pleasure gained by giving up control. What does it mean? It excites me; maybe it keeps me sane.

I miss kissing most of all; I only get kissed on my cheek now. I have no lover—she simply disappeared; yet remained with me. The pandemic has stranded us together, negotiating over space, trying to stay out of each other’s way. We live parallel lives. It terrifies me. Everything feels vulnerable to loss. Sometimes I feel like tomorrow, I might wake up alone in a field in the middle of nowhere. I’m sure that’s in a film I saw once.

I’m spent. I need a break. I‘m ready to brave my mask-less, libertarian neighbors to go for a walk in the woods. Who else will be in the 20-acre watershed reserve? I choose not to care. I retrieve my “outdoor” boots from the garage, put on my “outside” coat and mask up. 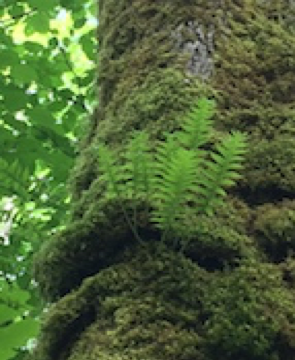 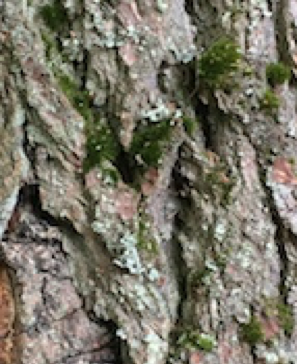 Birds’ utterances make distance palpable, keep opening up new sightlines of innumerable shades of green. Like everything, the forest is made of light. But also seasons, migrations; spring life and summer death; all needing to be aligned—and for the last four years, the seasons have always been out of alignment—each year in different ways.

A domestic cock crows just as I reach my turning back point on the trail. From the marshy black dirt, Bull Frogs honk, bellow their dominance; their ownership of a marsh of Firs; the Tree Frogs harmonize. I wrote about another walk: “I hear an animal noise, twenty feet up a Douglas Fir, camouflaged in silver/ grey bark, a Barred Owl—we stare into each other’s eyes, as a Hummingbird flashes above us.” Every living thing seems asks: are you a witness?

My nerves are shot. I change my shoes and jacket again to go on a booze run. At the Co Op, an employee in a black cloth mask with a blaze of neon blue hair, compliments me on my chipped black nail polish, as he/she/they/them unlock the liquor cabinet; I demure (yet elated—to be seen) remark that “all the hand washing has taken its toll.”

Cass Trystero is the chosen name of a poet with the given name of Randall Potts, who is the author of Collision Center (1994), and Trickster (2014, Kuhl House Poets, University of Iowa Press.) This diary entry is specifically credited to Cass Trystero who is non-binary and lives in Bellingham Washington.